Oracle’s latest edition for Java – Java 8 was released in March 2014. As usual, tons of new features have been added. There is one major change in the Memory management area that I want to discuss today.

Oracle has completely gotten rid of ‘PermGen’ and replaced it with Metaspace.

Short form for Permanent Generation, PermGen is the memory area in Heap that is used by the JVM to store class and method objects. If your application loads lots of classes, PermGen utilization will be high. PermGen also holds ‘interned’ Strings

The size of the PermGen space is configured by the Java command line option -XX:MaxPermSize

However, It is not unusal to see the error “java.lang.OutOfMemoryError: PermGen space“ if you are loading unusual number of classes.

The key difference between PermGen and Metaspace is this: while PermGen is part of Java Heap (Maximum size configured by -Xmx option), Metaspace is NOT part of Heap. Rather Metaspace is part of Native Memory (process memory) which is only limited by the Host Operating System. 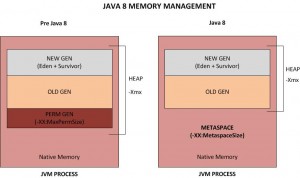 So, what is the significance of this change?

While you will NOT run out of PermGen space anymore (since there is NO PermGen), you may consume excessive Native memory making the total process size large. The issue is, if your application loads lots of classes (and/or interned strings), you may actually bring down the Entire Server (not just your application). Why ? Because the native memory is only limited by the Operating System. This means you can literally take up all the memory on the Server. Not good.

It is critical that you add the new option -XX:MaxMetaspaceSize  which sets the Maximum Metaspace size for your application.

Note that it is no longer sufficient to just monitor the Heap Size. You must also monitor the Metaspace which you can do by just keeping an eye on the ‘process size’ using your Operating System utilities (Example: ‘top’ in Unix/Linux, ‘Task Manager’ in Windows).

You can use the jmap command to print out Memory statistics of your current pre Java 8 application.

There you have it. With Java 8, PermGen is gone and Metaspace is in. Metaspace is part of Native Memory and NOT part of Java Heap. While this change may not be significant during development stage of the application, it is critical to consider this when going to production as you might not only bring down your application but bring down the entire server if your application eats up excessive Metaspace.

Make sure the Application Administrators and QA are made aware of this significant change and ensure adequate monitoring during QA phase (load testing) and in production.

Next post: Top 10 reasons why your Enterprise Java Application is slow

Previous post: 4 things you need to know about CPU utilization of your Java application