What is SYN_SENT socket status?

by Karun Subramanian on December 1, 2015

Say you are troubleshooting a connectivity issue between two devices. For instance, let’s say you believe your Web Server is not able to connect to your Application Server, because you are seeing Connection timed out or Connection Refused error all over your log files. One of the easiest (yet critical) ways to check the connectivity is using netstat command. You might use netstat command something like the following:

The output shows all the sockets that in the system. Each socket has various status. For example, a socket can be in ESTABLISHED status or in LISTENING status. These are the good statuses.

However, if you are having a bad day, you might see this weird SYN_SENT status.

The goal of this post is to demystify what SYN_SENT is and how you can go about fixing it.

But first let’s take a quick look at how TCP/IP works when a network connection is formed.

TCP/IP (Transmission Control Protocol/Internet Protocol) is a set of protocols used to transmit and receive data. US Department of Defence invented it, and it’s been the language of the Networks since early 80s (right, some of you had not been born yet). Internet buzzes on top of TCP/IP. While the protocol was designed to work on any physical medium, practically all the networks you will deal with nowadays are Ethernet and/or WiFi.

In a distributed applications/services setup (which most of us ar dealing with), the Network architecture involved is the Client-Server architecture. Let’s first look at how this looks.

Another quick note about how HTTP relates to TCP:

TCP/IP uses a 5 layer reference model (This is little different from the original 7 layer OSI model).

HTTP is an application layer protocol. And it relies on underlying TCP protocol in the transport layer. To lay this out approximately:

Digging deep into a TCP Connection

When the client initiates a connection to Server, there is a three-way handshake happening. here’s what’s going on. 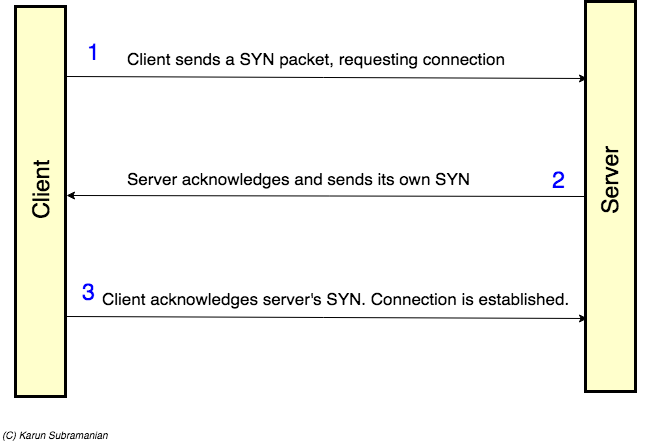 Checking the status of a TCP connection

You can reveal a connection status by using netstat.

You would typically be grepping the output of netstat for your remote IP address.

Now, based on the knowledge you’ve gained so far, you can readily tell that this connection is waiting for the server to respond. This most probably means the client’s request never got to the Server. And 99% of the time, this indicates some sort of Network block due to a firewall.

Note that the SYN_SENT status will not remain for long time. It only lasts for couple of seconds. So, you have to be quick in running the netstat command (perhaps in another terminal window)

There you have it. Next time when you see SYN_SENT, you know who to reach out to. Your Network team. 🙂

Comments on this entry are closed.

Next post: Finding your way in AppDynamics Controller UI

Previous post: ELK (Elasticsearch) up and running in few minutes